So, 2020 eh? Global pandemic, economic collapse, creeping totalitarianism… It’s just been one elegant tapestry of suck since the new year began. You wake up, you check social media, and it’s just like “No, nuh-uh, no ****ing way“, but then you gotta get out of bed, put on your face mask and meet the challenges of the day. Remember when the act of waking up wasn’t a heroic act? Where’s YOUR parade!?!?

Can we all agree that 2020 can suck it, and not in the WAP Cardi B/Megan Thee Stallion fun way? But good news, it’s the BEST WEEK OF THE YEAR!!! Shark Week! You may not be able to travel the globe and dive with the world’s favorite fish (fun fact: I was supposed to go to the Maldives in April), but Discovery Communications has their visa applications filled out, a big budget, and a vault full of B-roll to fill in the gaps, so we’re doing this!

The first night of Shark Week was, well, a lot of the same. Maybe that’s what people want, but I don’t think it’s what people need. We’re literally in mission critical mode. COVID-19 is just the Charles Whitman’s Sampler of the potential havoc that climate change could wreak on our world. Sharks are at the tip of the spear when it comes to the effects of climate change, overfishing, pollution (if you haven’t seen what’s going on in Mauritius, click on this link for another one Pinhead’s stops on the 2020 Grand Tour.

There are some frustratingly quick nods to these problems, and COVID-19, but not enough, and what we’re presented with isn’t bad for the most part, just nothing you haven’t seen before, and in one case, it’s a re-make of an existing Shark Week show with a decidedly poor casting choice.

As always, the Air Jaws shows are great (for me, the best was 2016’s Air Jaws: Night Stalker), and the visuals from this one are as usual, spectacular (or as Chris Fallows would shout, endearingly exuberantly, UNBELIEVABLE!!!). Three shark conservationists and scientists attempting to determine why the great whites of Cape Town, South Africa are in decline. Alison Towner and Dr. Enrico Gennari join Fallows in attempting to coax the giants from the deep and capture the footage in different ways (Fallows with the tried and true decoy and camera sled, Towner with a drone, and Dr. Gennari at night with what he refers to as the Disco Seal (it’s clearly a Raver Seal, for the record). I was definitely on Team Towner, and thought one of the breaches at Seal Rock (where I got to experience the lack of great whites personally in 2019) she captured was the best.

But here, Alison Towner only briefly gets to talk about why sharks are in decline — from the natural (two orcas by the name of Port and Starboard led a spike in predation of great whites in the waters off of South Africa) to the industrial (over-fishing of the shark’s food source – other sharks, and climate change). We don’t get an understanding of why great whites are so reliant on other sharks for food when there’s an island of delicious seals, and climate change is just mentioned very briefly. It’s these two frustrating gaps in knowledge that made me drop the grade. And really, we’ve seen this show before.

People will listen to stories about Illegal, Unreported, and Unregulated fishing (aka PIRATE fishing – and by adding the word “pirate”, didn’t you prick your ears up?), especially if it’s accompanied by really cool footage of great whites jumping out of the damn water. I’m sure Discovery Communications didn’t want to tackle this more because of the political implications of the idiot fringe shouting “Shut up, and shark! Keep your politics to yourself!”.

Sorry, Discovery. We didn’t want things to get political. But that’s 2020 for you.

Oh, and hope you enjoyed the presence of Allison Towner, because she’s the last non-male participant in these shows tonight.

Remember how did I didn’t want to get political? I really, really didn’t. But in 2020 that’s just not possible. #MeToo. That’s a thing that’s still happening, despite it being buried by a pandemic death count steaming towards 200,000, protests against systemic racism happening daily, and a president who thinks that being able to identify a picture of an elephant is a feat worthy of his immortalization on Mt. Rushmore.

So, I’m not sure, as we try to talk about the real problems in STEM, and specifically women on Shark Week, that orbiting a show around a convicted rapist is the best play here, to put it mildly. Look, I’m not saying anyone’s beyond redemption, but has Tyson ever apologized for what he did (I know he was convicted and spent 3 years in the joint, and 3 years on probation)? Made any effort at atonement?

It’s not even a new conceit for Discovery. We’ve seen this show before, and better. I gave 2018’s “Shaq Does Shark Week” 4 sharks! I only gave 2018’s “Let’s Kill Guy Fieri” (sorry, “Guy Fieri’s Feeding Frenzy“) 3 sharks, but on reflection I enjoyed it more than that (I sought it out and watched it again recently). There’s ways to do this, and better.

Also, starting off the show with the UFC guy? C’mon Discovery.

Did you know New Zealand just celebrated 100 days without a case of COVID-19? Thanks to leadership of NZ PM Jacinda Ardern, they’re walking around without masks, without a care in world. Eek barba dirkle! But during their lockdown (that people may have grumbled about, but you know, APPARENTLY WORKED), some guy made a new type of shark cage that DIDN’T work and that’s basically it. They tried to find the world’s biggest shark or something (OK, she’s named 747 and that’s awesome) and Jacinda Ardern’s husband filmed the expedition.

And it was fine — the shark cage fail was actually pretty cool, and we got some genuinely tense moments with great whites surrounding the cage inventor Kina Scollay (who charmingly named his device “the snackbox”). It wasn’t anything you haven’t really seen before (three for three tonight), and the Lockdown title is a bit of a throwaway and we don’t get any sense of how shark populations have been affected by the global lockdown, and…

While watching the show, I absolutely lost my ****. Home Depot is a sponsor this year. Do you know what else Home Depot has sponsored, at least back in 2016? THIS. The Destin Shark Rodeo, a once a year contest, where idiots go out and try to kill the biggest sharks they can find, and then Home Depot sponsors the scale where they weigh the sharks (OFTEN PREGNANT FEMALES), to win the admiration of illiterates who think that shark populations can sustainably tolerate this wanna-be alpha male crap.

Look, Discovery — I get it. Everyone wants a bite at the Shark Week apple, but not everyone SHOULD. I know it’s hard selling ad time during this crisis, no one wants to hang out at Coldstone, Dunkin’ Donuts, 7-11. But this? THIS IS WRONG. This let’s Home Depot try to greenwash its way out of sponsoring shark killing, and it REALLY turned me off.

Phew. I’m sorry if these reviews were a little more strident than usual — but, hey, 2020 man. And we get Shaq back tonight! So, let’s hope for some more lighthearted shark fun and info, and not the things that set my teeth on edge and make me yell at the TV. 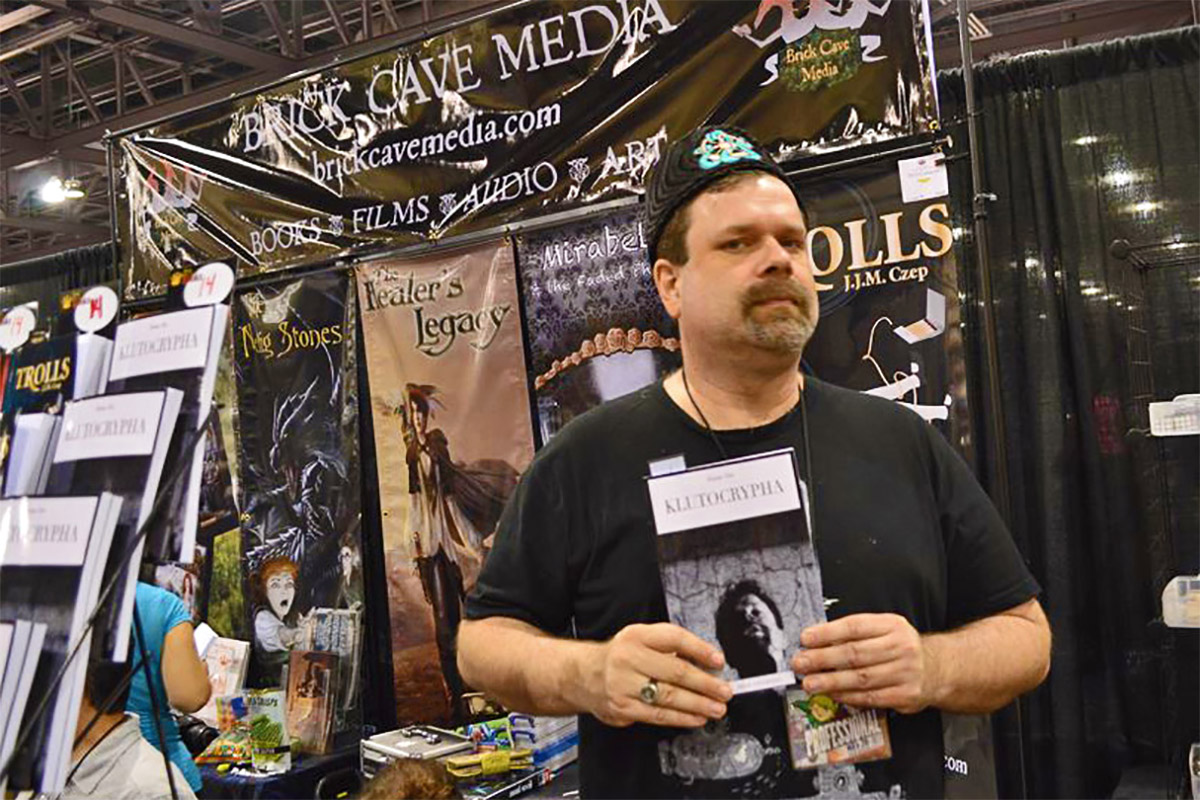 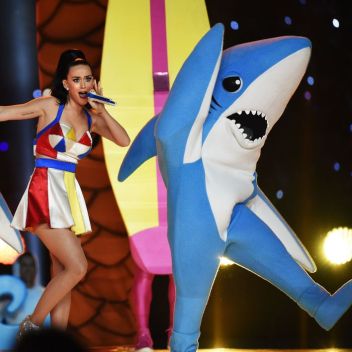 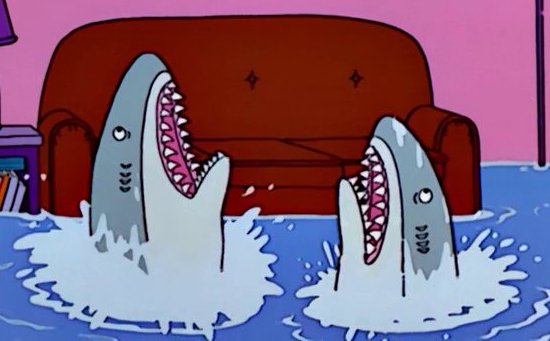 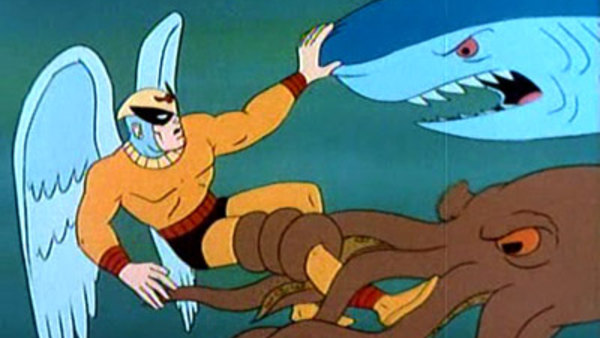 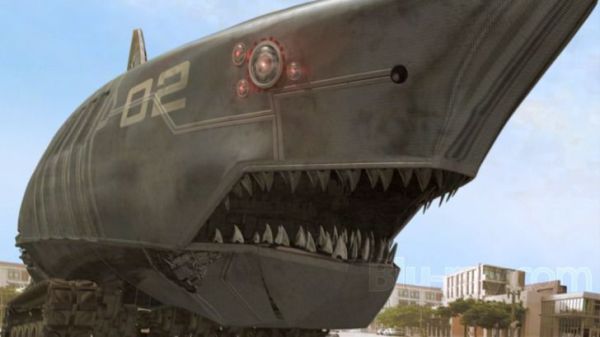