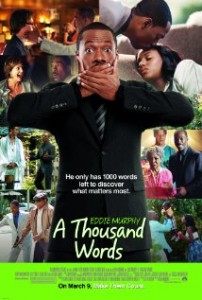 It’s interesting that Eddie Murphy has enjoyed his biggest successes over the past several years by playing the part of an animated Donkey in the Shrek films, a role where he is heard but not seen and that now he is starring in a role where he is seen, but cannot speak – well, probably shouldn’t speak. A Thousand Words is the name of this new Murphy movie, so start counting and let’s see if this picture is worth its namesake.

Murphy plays Jack McCall, a fast-talking literary agent who doesn’t read but still somehow manages to be successful by baffling his clients with bluster. This works until he tries to obtain a book contract with Dr. Sinja (Cliff Curtis), a spiritual guru who has a cult following that Jack thinks he can tap into and make millions. He seals the deal with Sinja, then out of nowhere a Buddhist Bodhi tree appears on his lawn and begins shedding leaves every time Jack utters a word. He has somehow connected with this tree spiritually and when its leaves are all gone, so is Jack — unless he can find inner peace and patch things up with all the people he has wronged in his life.

So the thought here is that Murphy is someone who is known for his mouth and his quick-wit, so wouldn’t it be funny if he was forced not to speak? It’s not. What we have is a potentially comedic film that is starring a potentially hilarious comedian who for the most part plays it straight in this movie, often with overly dramatic effect that is often funny for the wrong reasons. Murphy is even one-upped by nerdy Clark Duke (Kick-Ass) who plays the part of Jack’s assistant. When a second-tier actor is funnier than you are in your own comedic vehicle, it’s time to reevaluate your career path.

If you like Starbucks or Starbucks commercials, there is plenty of that in this film to make you happy. I’m estimating 10-15 minutes of the movie takes place either in a Starbucks coffee shop, or with the characters holding a Starbucks cup in their hands, at one point with an extended close-up of the green siren logo – making the audience want to scream. 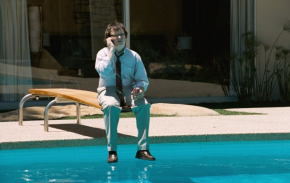 The product placement is so terribly blatant in this movie that I’ve actually decided to incorporate a new rule into my film reviews. If you pervert the film by overtly placing your product on the screen, then it’s fair game for criticism. So, if you don’t want a close look at your product to be part of the movie review, then don’t make your commercial a part of the movie.

So, Starbucks, stay the heck out of my movies, especially the ones that preach about harmony, inner peace and doing the right thing — the irony is too much for a light-hearted comedy.

Obviously A Thousand Words was not my cup of java. It had potential and it has its moments, just not enough to make it worthwhile. Eddie Murphy is too awkward in the dramatic scenes and there were far too many of them. This all would have played better if he had taken the comedic assistant role and another actor had taken the lead. I don’t deprive Murphy of trying to stretch and I’m sure he would like to break out of the formula he is stuck in, but I don’t think he has the acting chops to ever pull it off.

Review: Memory – Forget about it 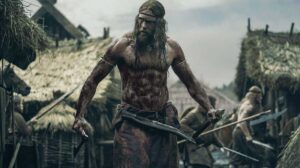 The Northman – Severe storms, swords and sorcery in Scandinavia 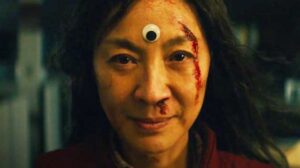 Everything Everywhere All at Once: Too much, or not enough? 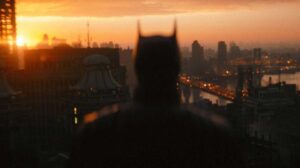