Disclaimer: the clickbait title is intended as a joke. No. 1 on this list is an obscure NES title, which you can scroll down to see below. That was the Trick. Now, here’s the Treat. Happy Halloween from all of us here at Nerdvana!

The Curious Case of the Haunted NES …

Are you tired of the same old costume parties that rely too heavily upon drinking to enjoy them? Trick-or-treating bringing you down? Is the horror film festival too far away to attend? Are you looking for a fun, spooky, retro game to play this Halloween? Well, folks, despair not! We’ve got just the right mix of spooky games and scary retro classics to cure your blues!

Alright, enough of that. We take a break from the usual festivities to bring you a list of our favorite NES games to play around this time of year. Here at Nerdvana, we love retro games, so for this feature, we’ve chosen to stay with Nintendo titles, as the earliest games offer the best Halloween experience.

Before it died in 2010, my original NES would randomly power itself on and off. It could’ve been a power supply or other internal failure, but I’m quite certain it was a poltergeist. That ghost certainly loved Battletoads. Occasionally, games disappeared and controllers randomly unraveled. Strange happenings, indeed, but I digress.

Obviously, Luigi’s Mansion and it’s sequel Dark Moon are excellent Halloween games, but for the purpose of this list, but for the sake of grasping at the last straws of nostalgia for our childhoods, we’re sticking with the good, old Nintendo Entertainment System.

The (extremely loose) criteria we used to judge these are:

So, without further ado, let’s begin.

The first thing one may notice about this game is the cover: a creepy skeleton lady, clad in a hat and blue dress, reaches with its grotesque hand toward the player. As a kid, I found this utterly terrifying.

Uninvited is a point-and-click adventure game. The original arrived in 1986 on Macintosh computers, with an MS-DOS and NES port on 1987 and 1991 respectively.

The game begins with you — the protagonist — awakening in the driver’s seat of a wrecked car. As you step out of the vehicle, you see that you’ve crashed in front of a mansion. Your passenger is missing, so you decide to check out the house. As you approach the facade of the building, your car explodes behind you. Thus begins a paranormal adventure for the ages.

The action takes place via a first-person perspective. The player moves a cursor around the screen, searching for clues, items, secret passages, etc., all while attempting to avoid certain doom.

The game is difficult, terrifying and, at times, frustrating. However, the atmosphere is spot on and the music can send chills down one’s spine. Uninvited is an overall satisfying experience, and everything we look for in our Halloween games.

Popular YouTuber The Gaming Historian made a superb and insightful video about the game and its history, well worth checking out below.

Firebrand, the red, fire-breathing gargoyle from Ghosts ‘n Goblins spun off into his own franchise with the

original Gargoyle’s Quest on the Nintendo Game Boy. The success of that game led to a sequel in the NES, which arrived in North America in October 1992 — just in time for Halloween that year.

The game combines RPG and action elements — think a paranormal Zelda II: The Adventure of Link — to create an engaging and supremely fun experience. The game manages to be both terrifying and engaging while evening out the difficulty of predecessors.

The weirdest thing about it is Firebrand’s inability to maintain constant flight. Capcom great job on this title and I wonder whether we’ll hear from the stalwart, red gargoyle sometime in the future, or whether it’s RIP for the franchise.

Demon’s Crest, the Super NES sequel, is worth checking out, though it largely removes the RPG component in favor of action. All three games in the series are available on Nintendo’s Virtual Console services.

Despite the possibility this will be the most frustrating game you’ll ever play, Ghosts ‘n Goblins is STILL a blast. This gem from 1986 is tough; two hits and you’re dead. The high difficulty — in tandem with the requirement to play through the game twice to complete it — gives it serious replay value.

The player takes on the role of Sir Arthur against an army of the undead. Arthur is small and weak, but determined. He will do everything in his power to rescue his girlfriend (the princess, of course).

Oh, and the boss of the game is Satan, King of the Demon World. It’s quite horrifying.

As mentioned above, this game has a spin-off in Gargoyle’s Quest/Gargoyle’s Quest II. Its sequel arrived on the Super Nintendo as Super Ghouls ‘n Ghosts. The game can be found on several Capcom collections and the 3DS Virtual Console.

This should not surprise anyone. If you’ve been following my work on Nerdvana, then you already know I’m a massive fan of the Castlevania franchise. A few months back, we did a massive retrospective on the series which you can find here. It goes without saying that Castlevania should be on this list.

Out of the three available games for the NES, we chose the first one because this is where everything began. The story of whip-wielding Simon Belmont and his quest to destroy the evil Count Dracula captured our hearts and imaginations early on. The sequels are excellent, but most of us make it a point to do at least one playthrough of this game each year.

In the first game of the series, we meet classic movie monsters, including the Mummy and Frankenstein’s monster. we also get to see Konami’s take on Igor and Transylvania itself. It’s a difficult and fun title, and we can’t get enough. If you can’t find your old NES copy or would rather play on a modern console, Castlevania is available on the Nintendo 3DS, Wii and Wii U Virtual Console. 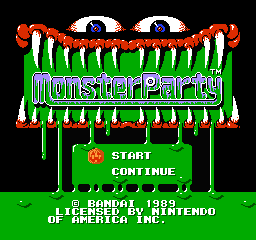 me to play this Halloween is the 1989’s Monster Party. Monster Party is bizarre, to say the least. The player is a boy wielding a baseball bat, coaxed into helping free the monster world from evil by a winged creature named Bert. Expect to fight evil Tempura shrimp, Giant Man-eating plants, eyeball creatures and more in this slice of NES terror!

There are many other wonderful, bizarre, fun NES games around that we unceremoniously omitted from the list, but I’d like to mention the superb Monster in My Pocket as a strong runner-up. It may have the monsters, but it lacks the spooky, creepy, bizarre component to be considered a “true” Halloween game. I also passed on terrible games like Ghoul School and fun-but-not-horror games like Werewolf: The Last Warrior.

We hope you’ve enjoyed this feature and who knows? Perhaps next year, we’ll cover scary Super NES games. Until then, thanks for tuning in and we’ll see you next time. Happy Halloween!

Castlevania Advance Collection is real, and out now